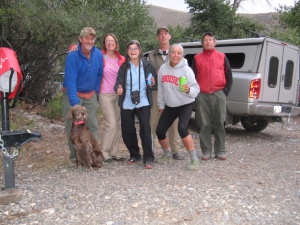 … yes there were thunder storms & some rain

Summer starts June 21st and ends September 22, right? Why do I think summer is over when school begins? It must be a hold over from my childhood. There’s still 6 weeks of SUMMER before fall begins, then I pray for and relish Indian Summer, and hopefully 6 more weeks of warm evenings, sun bright days, flip-flops, and my fishing waders.

You may have noticed that Wanderingkeri has been relatively unreachable this month … yep!  Fish camp and the Solar Eclipse have put August in my record book. 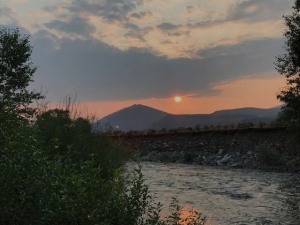 Fish Camp 2017 started on the 6th and we found the rivers running higher than expected, fishing much slower than expected, but friends and adventure always much better than expected. We had the primo camp space, right on the river  … a lot fewer mosquitoes than anywhere else and off the beaten track with less drive-bys searching for that weekend space. We met some folks from Utah the first night as we were enjoying our evening campfire. They’d pulled in to camp for 14 days to procure places to view the solar eclipse. When we left we bequeathed them our camp spot because though they had a green grassy meadow it swarmed with blood-sucking, flying insects which were deterred not in the least by the thick smoke from forest fires throughout the area.

My Sweetie & Best Fishing Buddy Ever!!

Half our group headed on up to Challis Idaho for the Braun Brothers Reunion music festival, but Sweetie, Jill, and I stayed to fish a few more days, I’m not really an audiophile. Greg and I did take a day driving back into Mackay Idaho for more water and to do the empty the dump stuff. It’s a beautiful little town with a big mining history, ghost towns, and the burger place we stopped at had killer-good shakes and I’ll vouch for their fish and chips.

With an adios to Jill we headed north stopping at Wally’s Cafe in Salmon for a bite … our waitress was more than excited to share with us she had served Kevin Costner lunch and that he had autographed the wall in the booth. We didn’t check out the autograph, but I did order pork chinese noodles with egg … I probably wouldn’t choose it again, but Greg’s burger looked juicy good.

Onward to Hamilton, we passed fire camps everywhere as we traveled over what’s called the Lost Trail Pass. We were thinking we might fish the East Fork of the Bitterroot river, but instead did a drive-by visit in Hamilton to say hi to our friends Klein & Dawn Houston. Our mouths were gaping in amazement at their talents … Dawn makes breathtaking quilts and Klein makes and plays wooden Indian flutes. They were preparing to exhibit in the Ravalli County fair. I’ll also have to have them give me gardening pointers as their’s was bursting with fruits & veggies …

Mala (by the door) & new buddies

Off we went, waving another farewell and headed north to Florence  … JW was Greg’s Hotshot supervisor and together there were a lot of oh my! stories. JW & Donna have this wonderful place with views that go on and on above Florence on the bluff , we had a great time, and Mala made some new friends.  Donna also makes spectacular quilts! She and Dawn have rattled me, I’m feeling like I should get my own quilt project out and finish it. (well, maybe when the leaves have fallen and the snow flies!)

We pit-stopped at the junction of highway 12 and 93 where we ran into another fire friend James Stone who was working the fire information booth.  In the middle of our chat he mentioned they were getting ready to shutdown highway 12 … I’m not even certain we said goodbye or thank you before we bolted from the store, revved the engine and blasted through the intersection hoping we wouldn’t have to drive the long way home through Missoula.  Whew! Since we weren’t stopping on the road over the pass they let us through … on the way over we didn’t see any smoke or fire, only a single helicopter  drafting from a small pond. (“Thanks Jim”)

Driving over Lolo Pass we followed the sad path  the Nez Perce took over the Bitterroot Mountains on their journey to escape the US government and my heart ached as I remembered their trail of anguish.  Later we stopped along the Lochsa River staying in a an almost deserted campground, but each space was reserved for, guess what?, the total eclipse.

The evening fishing was on the Lochsa in the Clearwater National Forest.  Greg had the fish karma, I had only fish dreams.