Admission time:  During planning I shortchanged Florence to only one night … I thought that Perugia was only an hour or so away and we could jet back to Florence for some more face time.  Like us Project Manger’s like to say, a plan is only as good as its execution and Perugia (our next stop) stole all of our time.  We, however, packed a lot of wonder into our wandering  in those 24 hours.

We entered Firenze from the Santa Maria Train Station and followed, like lemmings, the crowds flowing toward the city center. Our Bed & Breakfast, the Cicerone Guest House , about a 1/4 mile from the station, was another perfect location for our wanderings through Florence. It was only a short walk to the major art and cultural centers; the Uffizi Gallery, Accademia di belle Arti di Firenze, the Duomo Cathedral and Palazzo Medici Riccardi.

Following our less than stellar gps we headed toward the Palazzo Medici … I’m a small college town girl, growing up in the western United States, our most ancient buildings are less than 200 years old, well, unless you count the adobe dwellings of the Anasazi’s (they’re a story for another day) … but … to walk streets of cobblestone, laid before the Roman Era and to see buildings still used after a thousand years stretched my mind and imagination.

On our way to the Palazzo Medici, we stopped at a sidewalk cafe for refreshments and to get our bearings.  We noticed a sign on their doorway, “Garden Dining”, a garden? here? we were intrigued.

After wetting our whistles we pulled Rick Steves’ Renaissance Walking Tour Map from our pack and arm in arm and ear to ear (since I only brought one set of earphones) traveled back into history with Rick as our guide ( Renaissance Audio Tour ).

The Duomo and Baptistry

In the midst of the glamour and bustle of the Via dei Calzaiuoli we wandered past piazzas and chiesas (churches) decorated with copies of statues by Michelangelo and di Vinci, and other renaissance sculptors (the originals safely within museum walls throughout the city); the Orsanmichele and its 12 niches, the Duomo, the covered porch filled with sculptures of scenes from history, of high drama and myth (the Beheading of Medusa & the Rape of the Sabine’s), then we looked into the faces of renaissance artists, sculptors, and scientists while wandering the piazza fronting the Uffuzi Gallery.  We ended our stroll at the Arno River and the Ponte Vecchio Bridge ( built in 1345) and once the home of butchers and bakers is now filled with gold and silversmiths. 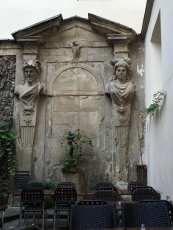 My View for Dinner

Evening came much too soon and we decided to return to our sidewalk cafe and investigate the ‘garden dining’ it advertised. Through the front doors, through the first dining room, passing the kitchen, passing through a second dining area and then … tucked between ancient buildings … a roman garden. Literally a roman garden … !!

Morning arrived sooner than sleepy eyes wanted, but we were determined to tour the Accademia and see Michelangelo’s David.  An hour early is not early enough … there were still lines, and more lines for entrance.

After this trip I’ve decided that standing in line although not my most favorite thing is an opportunity…an opportunity to start conversations with strangers who become acquaintances, even for a short while. I’m glad Sweetie is so gregarious … we learned much from the Australian teacher supervising 50 high school students, and we learned much about living and working in Dubai from a couple who were doing just that.

Then … tickets were purchased, the doors opened … and …The David.

I Instagrammed this in the moment; “In tears … The David radiates power and beauty photographs cannot portray”.

That is how I feel about Florence … my photographs don’t portray the vibrancy, the ancientness, the modern or the sublime …

P.S. Gelato Competition Results: Florence is a close second but Emilia’s is still #1 … can Emilia hold its lead heading into the last 10 days of our Italian Journey?