Tom about 12 years old .. with the tipped hat (the boy to Tom’s right and the little girl are neighbors) the others are Tom’s brothers.

Swoosh! Summer has blown past with it’s run run go go do do mentality and the September lull has given me time to look into the drawers and closets, boxes and piles of projects that always await winter’s slower pace.  After a fine evening and morning of fishing, Greg is making yummy spaghetti sauce from Ray’s tomatoes (ours are still in the fried green tomato stage) and I took a breath and wandered back into my genealogy addiction.  Since 1832 my family has been members of the Church of Jesus Christ of Latter-day Saints and  each generation has worked diligently  for the salvation of the dead through finding our ancestors. That means there isn’t a lot left for me to do in searching for my heritage. So … I have been collecting stories, researching for information for stories, and hunting pictures to illustrate and share them with my family.  (Remind me to tell you about our My Heritage – My Legacy Grandma Keri weekends some time).  The following story is about my Grandfather Thomas Murdoch Nicol, (Tom), when he was about 10 years old … my Grandpa Tom (or Grampon as christen by my cousin Brad when he was just learning to speak … say Grandpa Tom really fast a few time … you’ll get it) .  I hope you enjoy …

The weather wasn’t bad when they mounted their horses that early winter day.  Tom, his dad Hyrum and some others had been visiting and doing business in Heber City, Utah.   They were looking forward to the two day ride through the canyons home to Duchesne. Tom loved being outdoors and sleeping beneath the black star filled sky. As they rode up the canyon, snow began drifting slowly down, fat lazy flakes that brushed their cheeks and powdered their hat brims.  Higher they rode and faster the snow came down, smaller now and sharp, as the wind twisting through the sagebrush pushed into their collars and under their hats, leaving them breathless.

On they rode more slowly. Tom, 10 years old was hunched into his coat, the reins gripped in gloved fingers peeking from his coat sleeves, trusting his horse to pick the safest route. The snow kept falling, covering him and his horse like a wooly blanket.  Finally he could ride no longer; he was sleeping on the back of the horse, stuck in the saddle by legs too cold to feel.

Hyrum, his father, knew they could not continue further in the storm. Peering through the blinding white he searched for the cabin that everyone called the  horse thief’s cabin; empty now, but a haven to wait out the blizzard. Through squinted eyes peering briefly from under his hat brim, Hyrum spotted the old cabin, south of the road in a little hollow.  He hollered to Tom to hang on and the horses struggled through the drifted snow to the leeward side of the cabin. Tom, wake up, climb down.  Tom was almost frozen solid, so I was told and his father had to pry him from his saddle and carry him inside. Whether there was wood for a fire or the circumstances of the night they holed up in the horse thief’s cabin the details are lost.

However, once the storm broke the next morning, they continued to Duchesne through a world of wondrous glittering snow, and the winter sunshine glinting from mounded sagebrush hidden below the blanket of white.  Though the snow hid the road and the way home was more work and slow plodding they finally dropped from the mountain canyons to the high desert terraces of home.

[1] The descriptions of the trip are fictional although the cabin, frozen Tom, and the blizzard are not. Family story of Thomas Murdoch Nicol was related independently by Thomas Keith Nicol (son) and Jean Nicol Robison (daughter) to Keri Vest (Tom’s oldest grand-daughter). 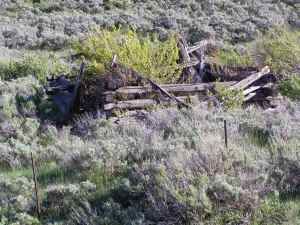 Ruins of Horse Thief cabin,  South of Highway 40 by Sheep Creek turn off between Heber and Fruitland Utah

Learn more about Thomas Murdoch Nicol and his family  along with more pictures as http://kerisfamilyconnections.com/nicol/